GERMANY – Fast on the heels of the historic agreement between Peter Brock and Shelby Legendary Cars to reproduce one of the most iconic race cars in history comes word out of Europe that supercar builders are pushing the envelope again with an exact 1964 Cobra Daytona Coupe recreation for enthusiats across the pond. Two companies, Daytona Coupe Aps/Denmark and AMMAS/Germany, now build FIA legit race cars that are authorized by Brock himslef.

“It Is All in the Details” says the business card of the Daytona Coupe Aps company founded to produce exact recreations of the six original Cobra Daytona Coupes – in line with FIA regulations. Mikael Tarne from Denmark teamed up with Peter Brock and Bastian Ebener from American Muscle and Motorsports Services (AMMAS) to relive history for Ford fans across Europe. The excitement of seeing Cobra Daytona Coupes again on the racetrack only got stronger when the six original CSX-VIN’d cars were joined for a vintage racing appearance at the Goodwood estate back in 2015. 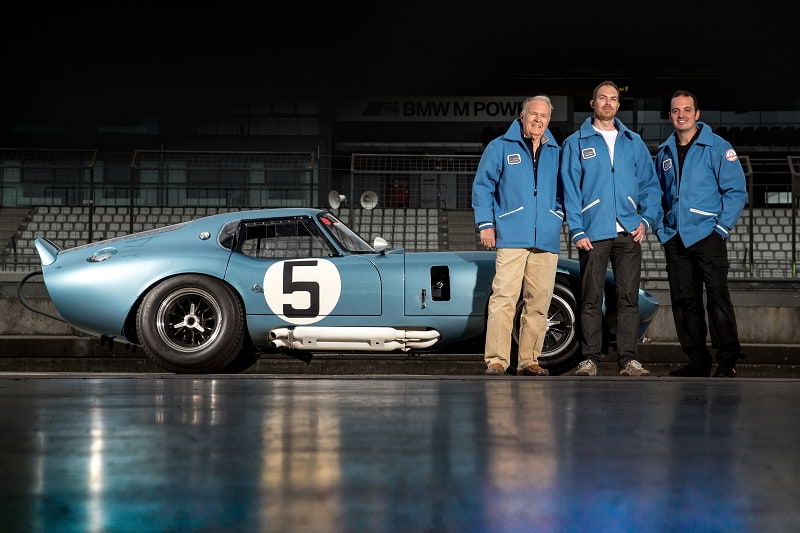 Now, some three years later, the dream to see racing royalty again came true with the presentation of the recreated Le Mans version CSX2299 (now called PBX 2299_01) at the Nuerburgring Classics held ove the June 16-17, 2018 weekend. It paced a full Nordschleife round of the 3-Hour FHR endurance race without any failure, despite the fact that there had been almost no time for testing it prior to the event. The Daytona Coupe received the official signature without hesitation by Peter Brock. It was said to be the first one endorsed by Peter Brock worldwide as a true recreation of his original design that had been transformed into reality by the Italian building company back in 1964. Only the protoype CSX2287 had been built in the U.S., as all of the others were produced in Italy. 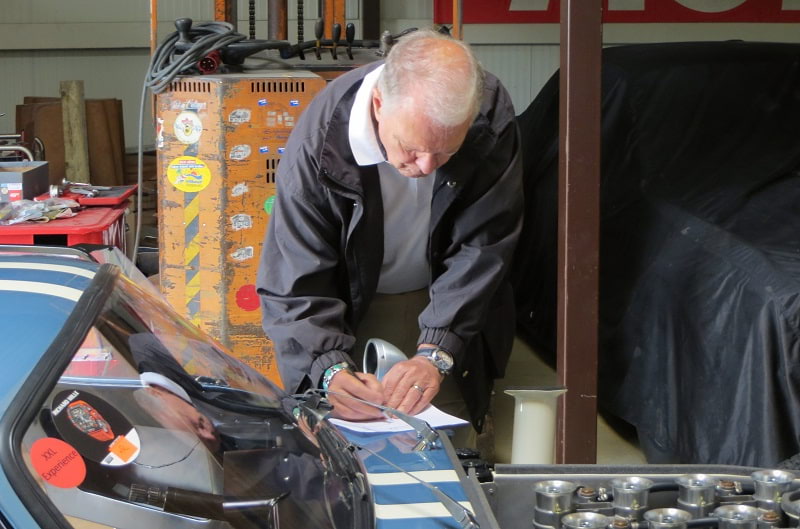 For 2018, a few improvements were necessary to make it an official FIA capable racer. AMMAS is a rather small team of youngbloods, but with the right spirit building and servicing FIA-legit race cars in the past years. Becuase of that reputation, they gained a lot of trust among vintage racers during that period. 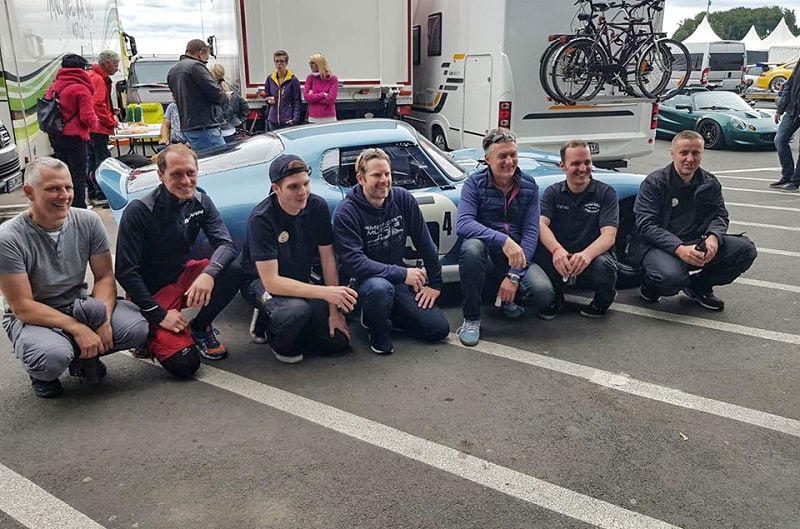 Project owner Mikael Tarne wanted to choose the best team possible to make this happen. In fact the team became only operative when all three leaders – Peter Brock, Mikael Tarne and Bastian Ebener – agreed on their vision of accuracy and precision and shared a professional approach to the builds. To them, there was only one way to conduct the recreations: the best is just good enough, and it is all in the details. The project had been supervised and monitored with that as guidance ever since. After the first had been completed, the result convinced the trio that they were on the right path, so the next one is already on its way: PBX2287-01 is to be ready in January of 2019.

“I prefer to work with people that have the same enthusiasm and heartblood at their fingertips to make my designs raceworthy, just as I had in my mind back in the days,” Brock said. “The Italian-made versions of my Daytona coupe were all made different, and since they are still alive but cannot be raced anymore due to their very high value, I understood from Mikael following the Goodwood event that there is a different need for these recreations. So I joined the team to make our dreams come true.”

Brock welcomed them in the U.S. and visted Mikael and Bastian in Germany in Stolberg more often during the project’s development. PBX2299-01 was just the first project. Once the financial backing was put in place by the founding company Daytona Coupe Aps by Mikael Tarne, the project was launched immediately. First, 3-D digital scans of the originals were created back in 2017 by a subcontracted IT house in the U.S. from CSX 2299 out of the Miller Collection, as well as from CSX 2287 at the Simeone museum and the raw data was turned into usable data by Up2Tec in Germany. From there a wooden buck was created to physically check the later overall dimensions, and no derivation was allowed nor made. The body was hand-formed over the buck by the AMMAS skilled bodymen. 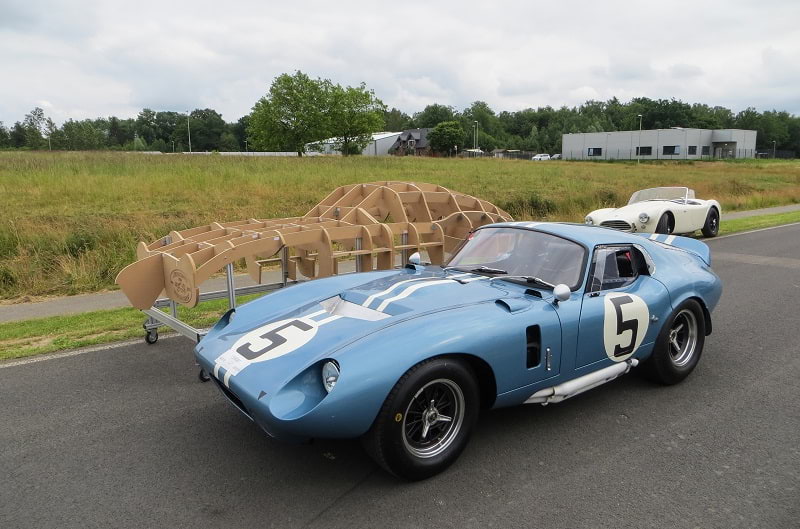 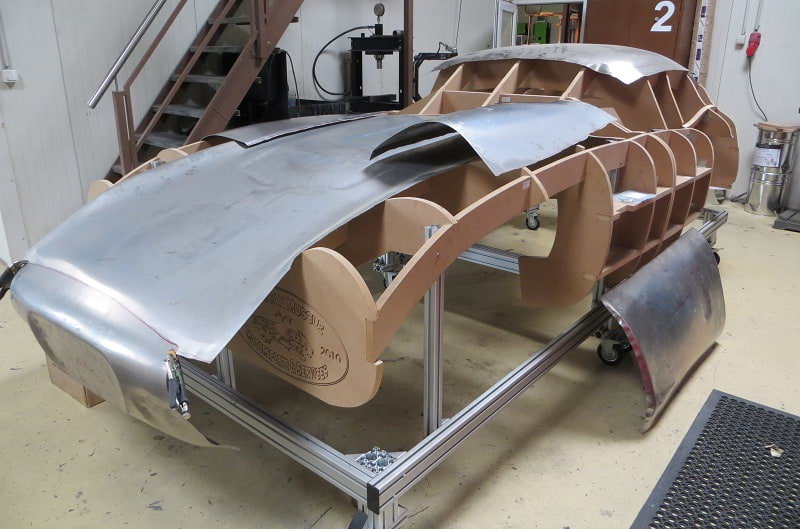 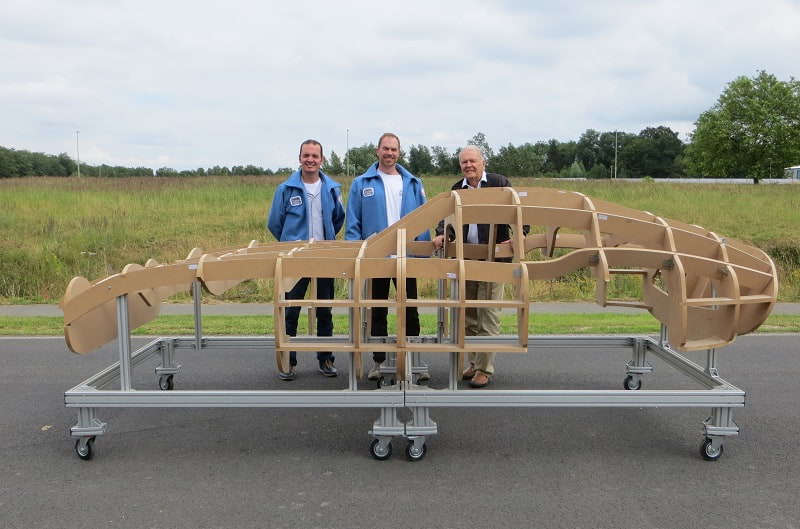 “This process took the most time, but also was the biggest fun,” said AMMAS Owner Bastian Ebener. “We are quite experienced in building chassis and framework that can withstand the tough conditions of endurance road racers based on the experience with our two 1968 FIA Mustang Coupes and our Cougar, plus many other customer cars, so we didn’t have many headaches with the technical approach, yet the no-compromise philosophy inspired by the three of us in recreating the design and the exact body shapes just like the original needed extra attention that required way more time.” The results show that it was time well spent. 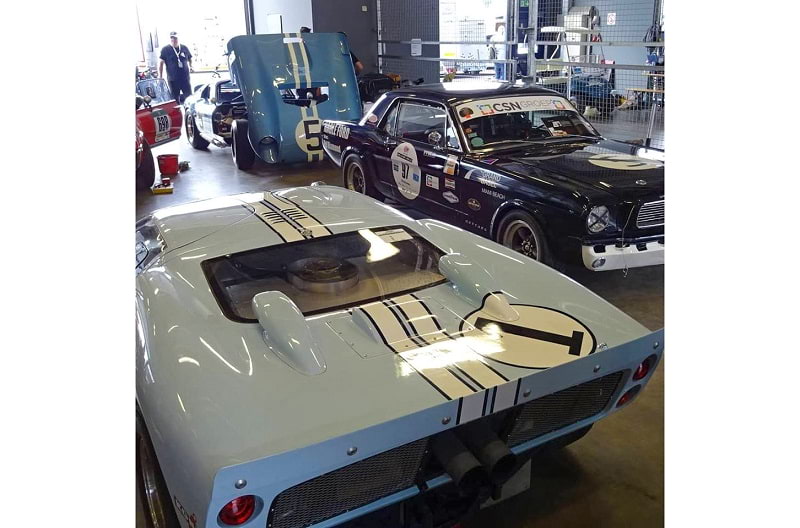 According to some accounts, the second Daytona Coupe ever built, the original CSX2299, was made in Italy since the small Shelby team at the time had no resources left. But some other reasons have been reported from insiders that are more complex. One of them was that, due to a misinterpretation of the specs, the car was born with some derivations of the original Brock design. That meant the windshield was higher, and the rear body line was a bit different on that car. “We had to stick with that very same original interpretation for our recreation, which we felt has to be exactly like the existing one,” Bastian said.

These European-built FIA competition versions were planned out to be exactly like the ones that toured the racing tracks around the world back in 1964-65 and onwards. In order to be approved today by the FIA there was no choice but to make certian modifications: They had to have a 289 V-8 and exactly the same equipment as appeared on the cars back in those days.

The new car was revealed first at the Nürburgring Classic in mid-June, where PBX2299-01 was permitted to pace the 3-Hour FHR Endurance Race on Sunday afternoon for a full round of the old track called Nordschleife. The build on the car was just finished late afternoon on the Friday before and brought to the Ring on Saturday with almost no testing having been made. Even so, the car performed very well in front of the field of racers, and unfortunate drama was afforded to the spectators nor to Peter Brock. The team had a chance to do another 1-Hour race later on. 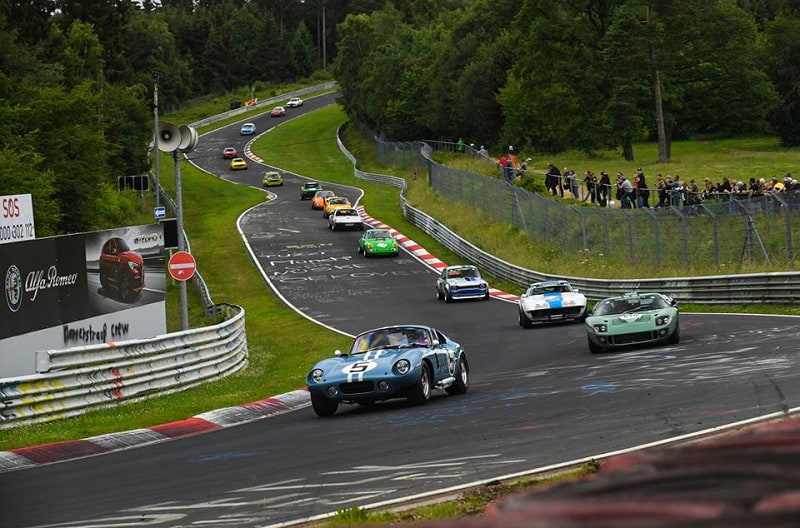 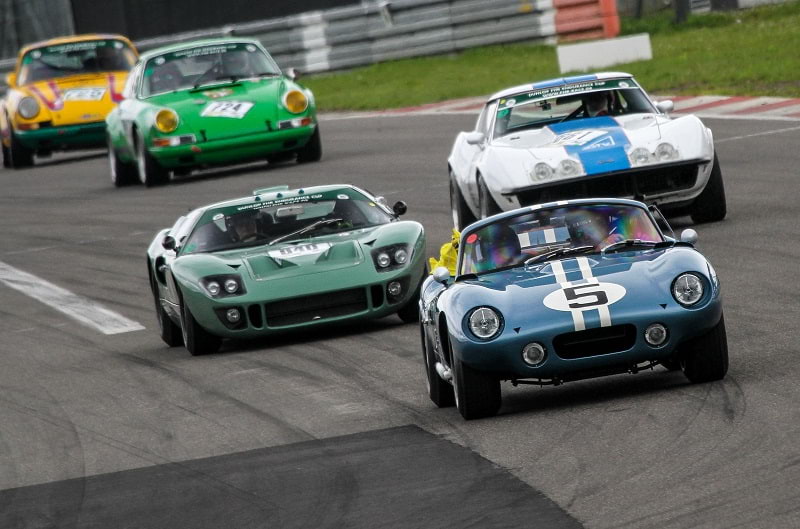 Convinced by the very well performing “proof of concept” on its first outing, Brock signed the car on the middle tunnel, thus issueing the official permission to use his name on the car. Actually PBX2299-01 is the first and only FIA Competition Daytona Coupe recreation worldwide signed by Peter Brock. 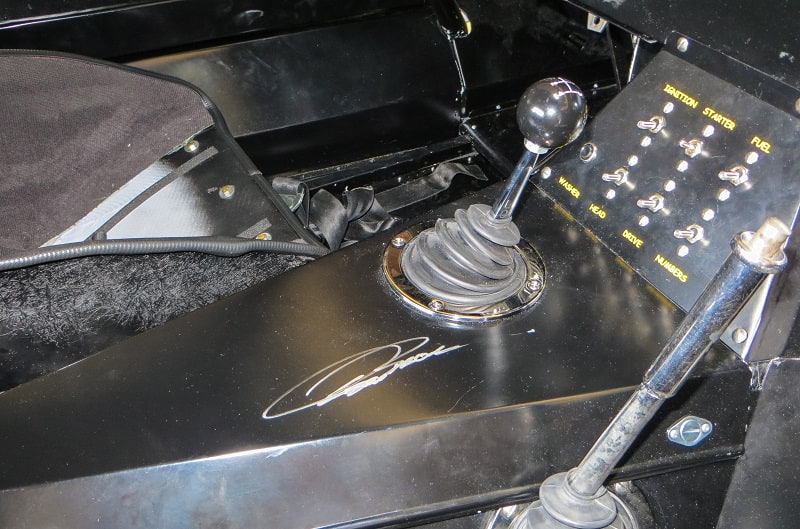 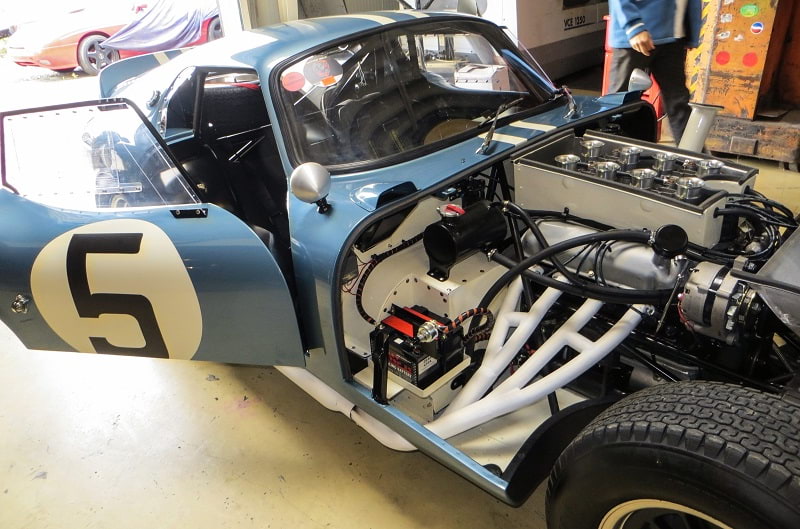 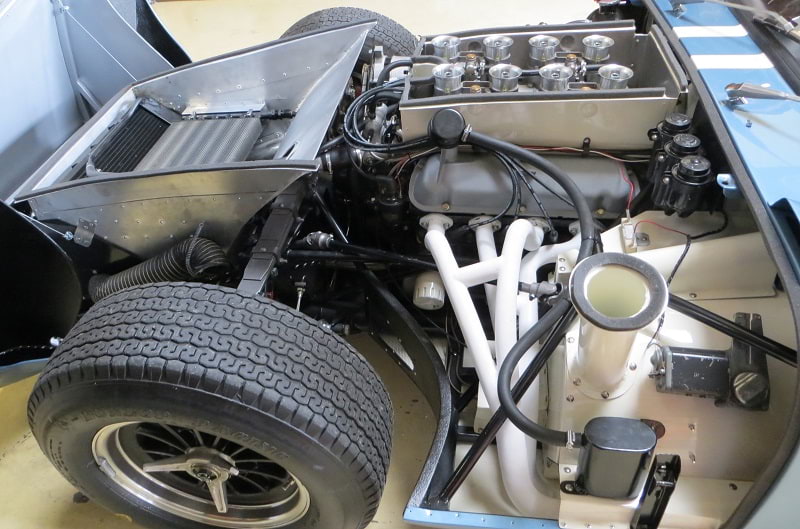 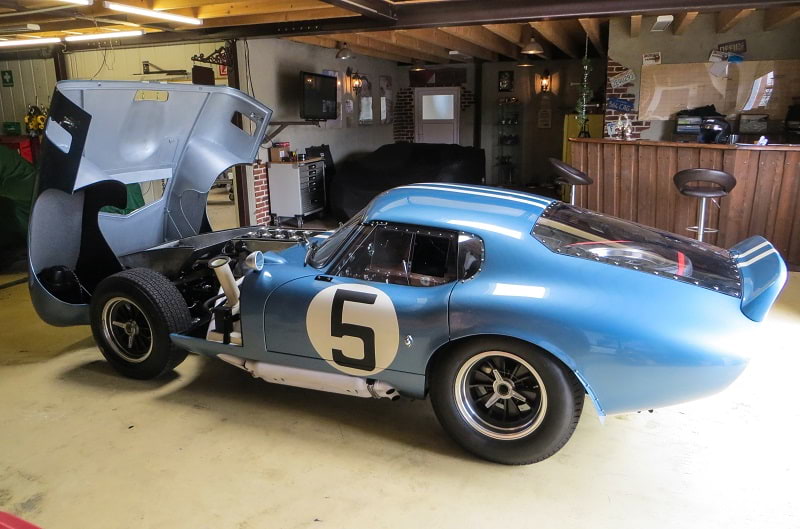 Brock’s wife, Gayle, said that she, too, enjoyed the atmosphere and team at the Ring and they all visited Mikael Tarne and the AMMAS team in the week after to discuss the partnership for further recreations. As mentioned earlier, PBX2287-01 will be the next Daytona Coupe made as an exact recreation of the only existing unrestored car, as well as to the level of its fist origin as a race car. Since both of these chassis were also raced under the darker “Guardsman Blue” Ford-sponsored livery in 1965, future clients of the Daytona Coupe Aps company will have the option to select the exact livery under which each car had raced at specific venues over the two seasons they had competed. 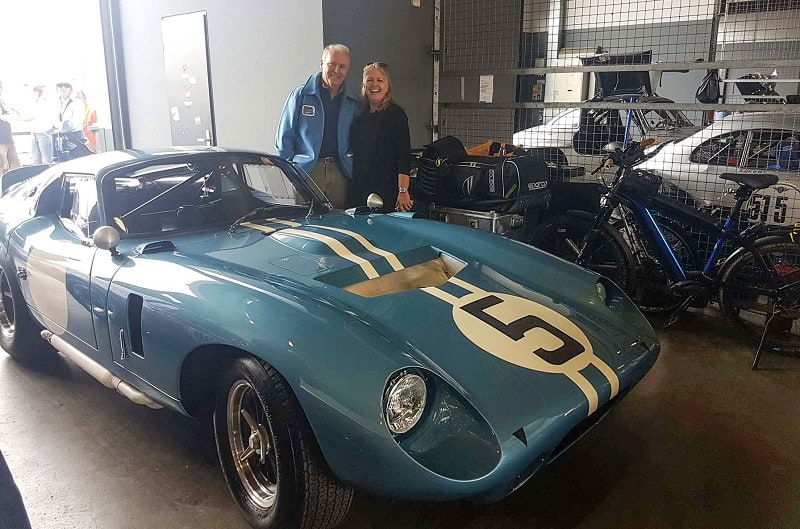 Proof of Authenticity: Each recreation Cobra Daytona Coupe is fully endorsed in form of a letter of authentication signed by the original designer, Peter Brock.

FIA Approval:
All cars are built according to FIA regulations and comes with full HTP papers. Improved side-impact crash protection has been built into the recreation, which allows some detail and quality improvements. 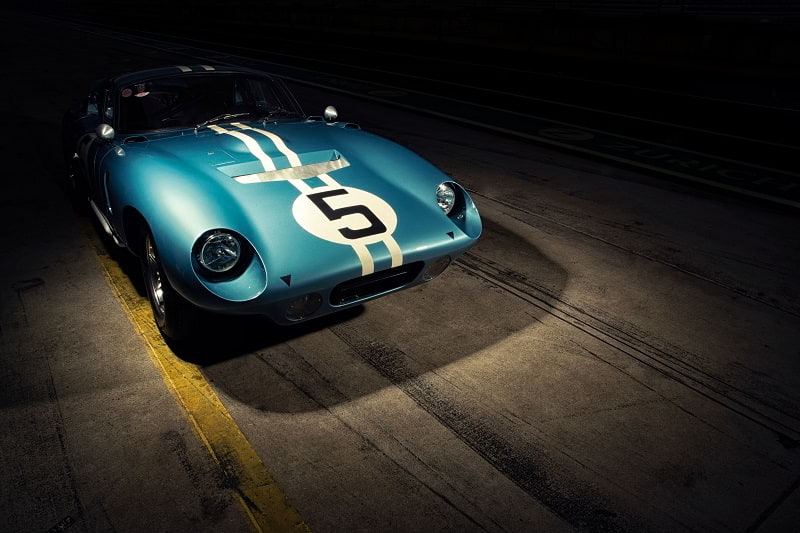 Back To The Future: Peter Brock Revives The Daytona Coupe
Scroll to top